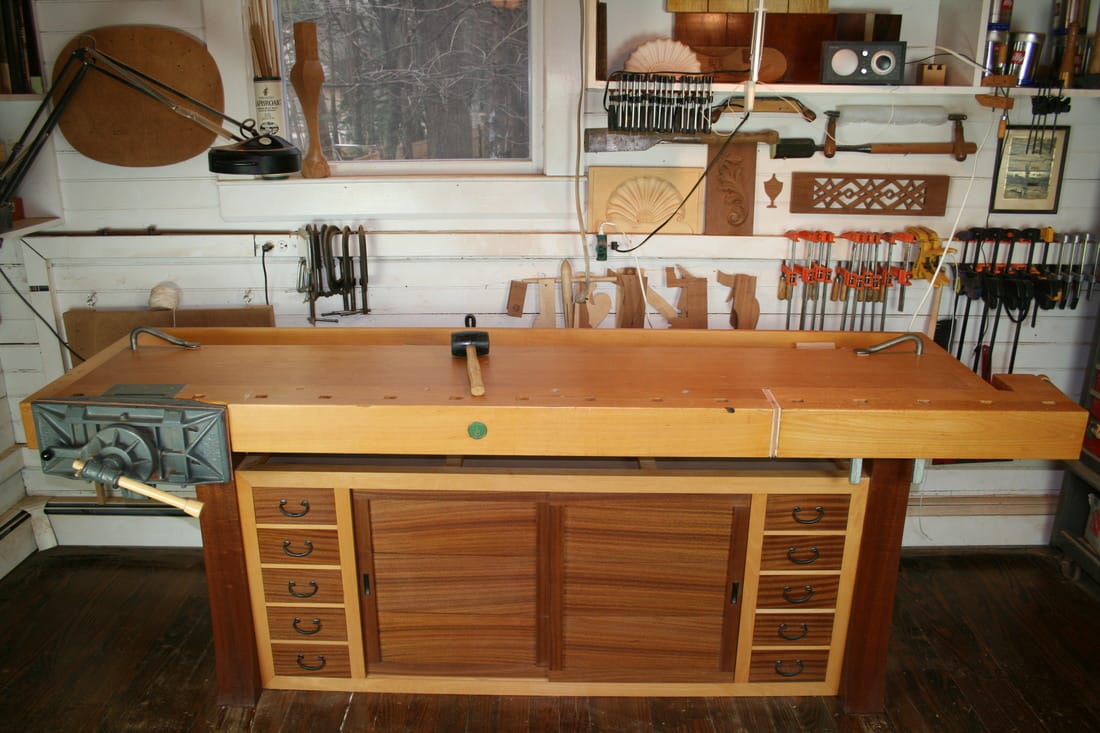 I think every furniture maker's goal is, at some point, to build the dream workbench.  I bought a good Ulmia workbench back in 2001 and used it for 15 years.  The front vice became racked and unuseable and the base was always annoying and lacked any storage.  And, of course, I treated it badly.  After finishing India's spice chest in 2015 it was my turn to build something for myself.

Step one - buy an emmert vice
Back in 2004 when on a tool and wood foraging trip with Alastair he found and we both bought Emmert vices out of a barn in Oxford PA, near where they were made.  We both bought K1 universal type U6 Emmerts which makes them just about 75 years old.  Alastair took his back to Australia and last year when we visited I saw it installed.  Mine went into storage.

They are the worlds most versatile woodworking vices.  They were made for pattern-makers when patternmakers were critical to manufacturing in the US.  Patternmakers made prototypes in wood to the specifications of engineers and these were used to make the parts for the machinery that was used to make virtually everything in the factories around WWII and  beyond. The patterns had to be accurate to tolerances of 1/1000 of an inch.  The wooden prototypes or patterns were used to cast machinery parts, work that is often now done by 3D printers.

The Emmert vice weighs about 85 pounds, the jaws open more than a foot, tilt and rotate 360 degrees.  They also can be angled and have an insert for handling oddly shaped patterns.  I have covered the jaws of this vice with leather to protect pieces from compression marks.  To install one of these beasts flush with the workbench top requires chopping out and shaping the edge of the workbench and clearing space underneath for the massive tilting and roating mechanism as well as the support bar for the jaws.  And it can only be installed on a very heavy bench because the weight when jaws are fully extended can tip a bench forward.  After sanding the old Ulmia top down in a Time-Saver to remove 15 years worth of chopping and drilling and after re-finishing the top I finally got the emmert installed.  Below is a link to a vocational film from 1940 which discusses all forms of woodworking  and has a section on patternmaking.  An Emmert vice is visible 9 minutes into the video.


Step Two - Make a new base
The base I ended up with after alot of design trial and error is a japanese influenced shape for the legs and drawers.  Japanese influenced because japanese woodworking benches actually sit directly on the floor with no base.  The design uses a three way mitre joint where the eight corners of the cabinet meet and it has very light japanese style sliding doors. It also has massive mahogany legs whose weight helps counterbalance the emmert.  It is otherwise fairly conventional.  The three way joint is one called kane tsugi (translates as "good wood joint") in Japan and is called the dumpling joint in China (dumplings are folded 3 ways) and has been in use more than 500 years.  It is seldom used in modern furniture because it is so time-consuming to cut.   It is so complete and tight that it does not really require glue to hold it together.  There is an english version called a parson's mitre but it is neither as elegant nor as strong as the japanese or chinese version.  There are some photos below of one of the test joints I made before undertaking the thing and a link to a FWW article on how to make the chinese version of the joint. 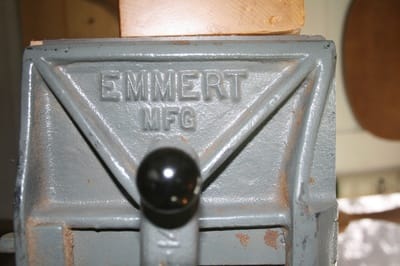 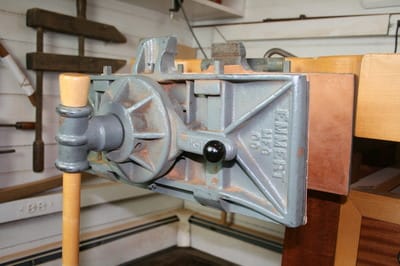 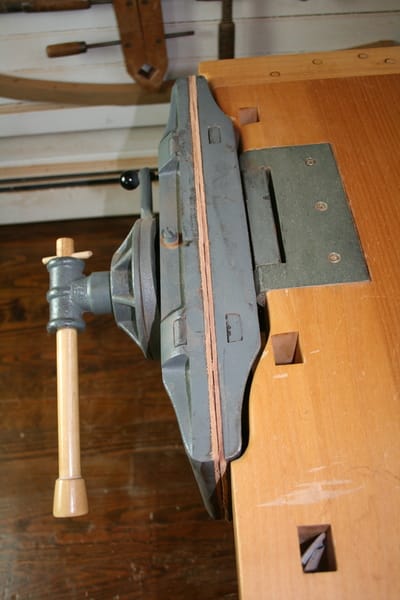 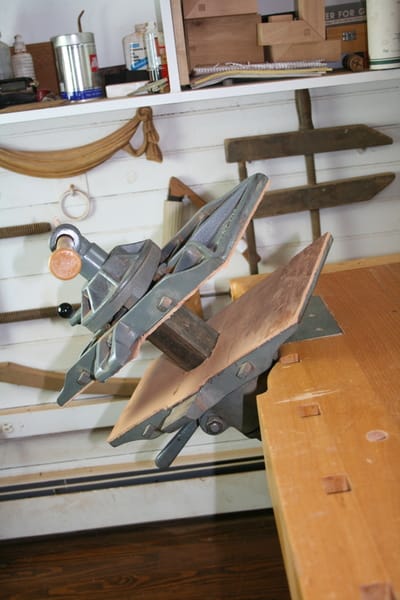 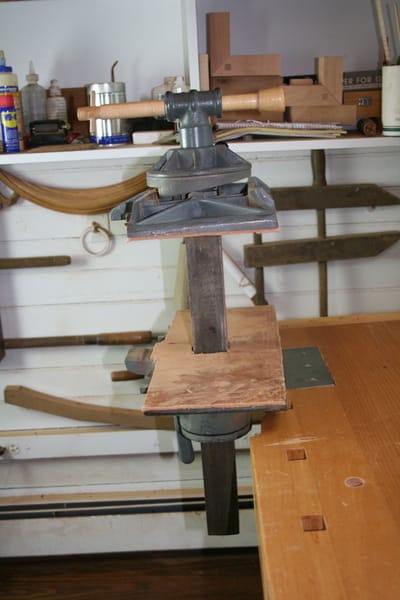 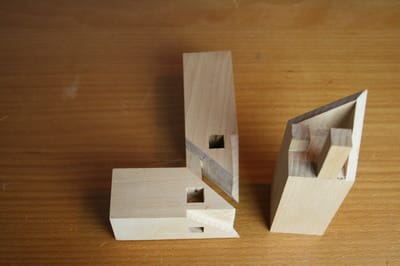 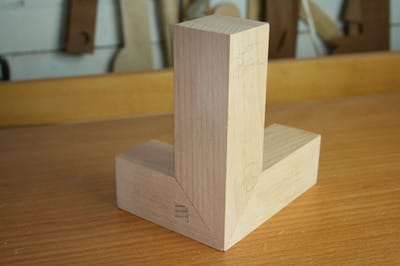 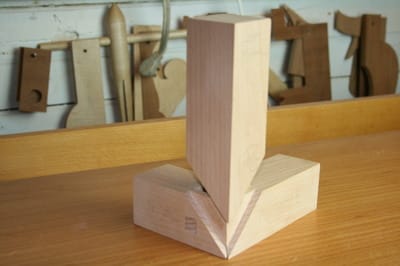 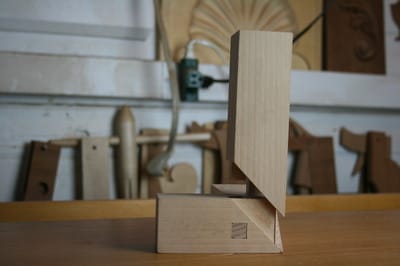 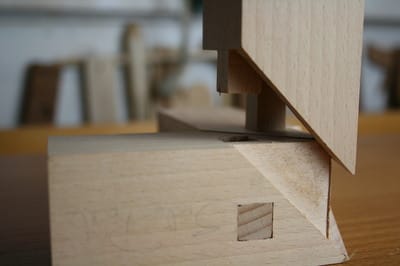 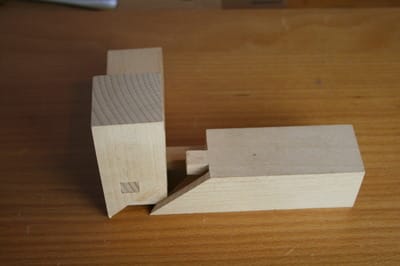 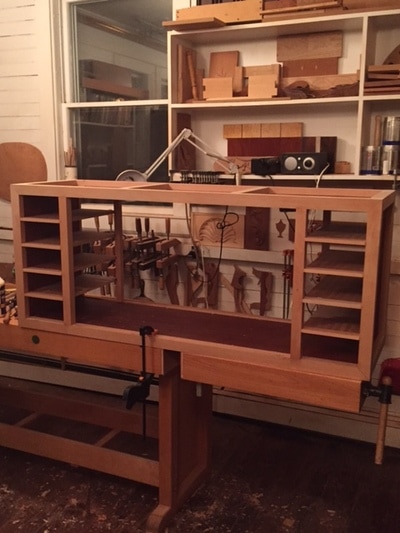